A stunning Egyptian-themed cluster pays slot featuring a hypnotic mix of Power Wilds and Power Ups that give enhanced reel formats to increase your win chances. There is also a free spins round with enhanced Golden Glyph Wild and a progressive multiplier that can reach up to 99x. 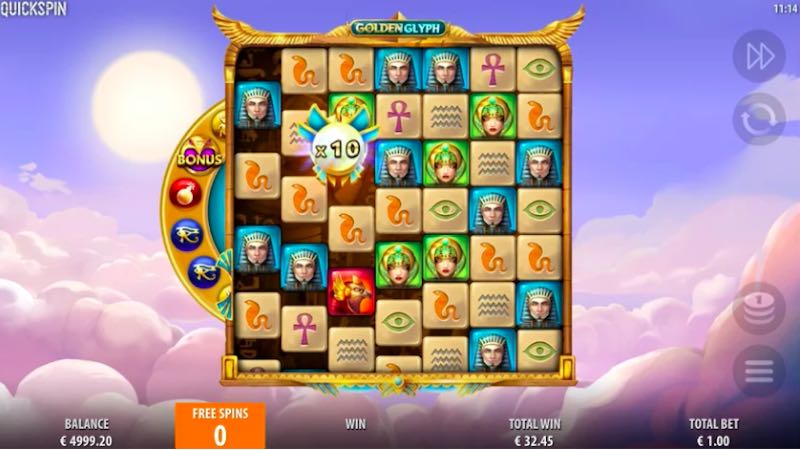 WHERE CAN I PLAY Golden Glyph?

Egyptian-themed slots are ten a penny in most online casinos – from the ‘Book of’ series through IGTs classic Cleopatra and beyond, we’ve no shortage of Scarab-infested reels to spin these days. So why take a ride on Quickspin’s latest release? Well, aside from the classy graphics that we’ve come to associate with this Swedish studio over the years, Golden Glyph also happens to be one of the better slots in that hit and miss genre of games called Cluster Pays.  This is largely thanks to the interesting embellishment of Power Wilds and Power Ups that enhance the reel set in the base game as well as the use of progressive multipliers in the free spins round that push the win potential of this slot up to over 13,000x per spin.

Like all their games, Golden Glyph is instantly recognizable as a Quickspin title. It shares the same classy design style as all their classics, including Sticky Bandits and Big Bad Wolf. In this instance the reels form a 7×7 grid in the usual Cluster Pays style, set against the backdrop of an ethereal sky with sunbeams and clouds. The low value symbols in Golden Glyphs are the hieroglyphs, whilst the high value symbols are iconic Egyptian’s Tutankhamun, Cleopatra and Horus. If you manage to form a cluster of 15 or more of the Horus symbol then you stand to pocket a prize of 250x.

Look out as well for the W which represents the Wild symbol.

The objective after each ‘spin’ is to form a cluster of 5 or more identical symbols, or a mix of symbols and wilds. When you do you will receive a payout and winning symbols will be removed to be replaced by different ones. Consecutive wins can occur.

The wild symbol is key to this game. After each win cluster is removed, ONE Power Wild will appear in the vacated spaces. This increases the chances of forming another win cluster when new symbols drop onto the grid. The Power Wilds also have an impact in triggering the Power Ups that are available on each spin too.

At the start of any spin FIVE power up modifiers will be chosen to be displayed on a wheel to the left of the game grid. These become activated in order after each successive cluster win until either there are no more wins, OR the final Power Up modifier (which is always the Free Spins round) is activated. These are the Power Up Modifiers:

Golden Scarab – Between 4 and 10 wilds randomly placed on the grid.

Eye of Horus – All instances of one of the low value symbols are removed from the grid AND you get 1/20th of your stake for each one taken out.

Blaze of Fire – A destructive symbol that destroys all others horizontally and vertically adjacent to it and sets off another tumble. Each symbol destroyed gets you 1/20th of your stake.

Now, things get interesting here because another super-charged wild is added to the reel. It is called the Golden Glyph Wild and it moves around the grid after each spin. When it forms part of a winning cluster then 1x is added to the progressive multiplier total applied to your winnings. This only maxes out at 99x, so there is huge potential if you can score enough consecutive wins.

Golden Glyph is an excellent medium variance slot that combines the cluster pays format with the current trend for progressive wilds mixed in with free spins to drive very decent pay outs. This game doesn’t have the same awesome potential of a top high variance Megaways™ title, but it is still a very good medium variance slot with regular action and enough features to keep things interesting in both the base game and the free spins round. One for both casual game players and serious slots fans. 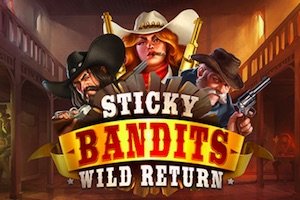 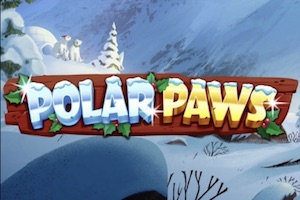