A new WWTBAM slot from BTG with a softer variance and just 243 ways to win. Stand out features are the Mystery Box Tranforming symbols and a free spins round with a multiplier than can reach up to 50x. Top payout of 12,000x +. 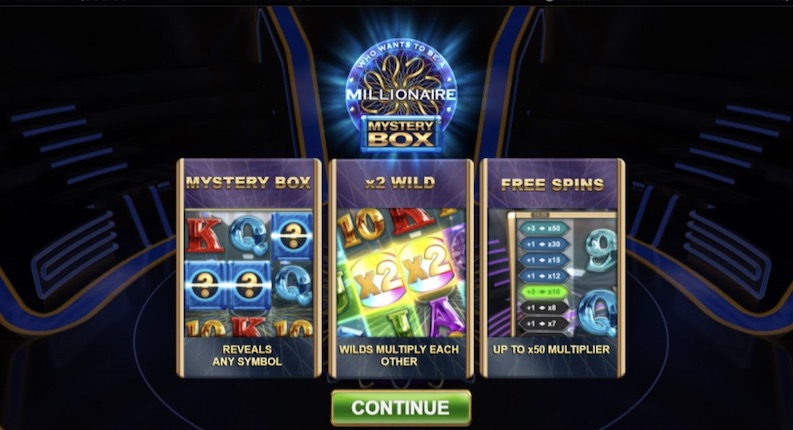 WHERE CAN I PLAY Millionaire Mystery Box?

Free spins round is infrequent

Who Wants To Be A Millionaire Megaways™ arrived in our casinos in late 2018 and over time has shown itself to be a classic of the genre, with massive potential and plenty of big win videos on You Tube to tell the tale.

A razzmatazz brand like WWTBAM is always going to work well as a slot so it’s no surprise that BTG have created a follow up to milk the deal further. But rather than follow the same high variance path as the original, here the Australian outfit has turned down the variance a notch and simplified the gameplay. No Megaways™, but still some interesting features, including the in-vogue Mystery Symbols, a double-up gamble opportunity on every win, and escalating multipliers in the free spins round that can drive mega wins.

We see broader appeal in this game than the Megaways™ version – and likely a popular slot across the board in the run up to Xmas.

The WWTBAM branding is unmistakable here – players are thrown straight into the bright lights of the studio with the familiar soundtrack in the background. This is a 243 ways to win slot with 5 reels and 3 rows.

The lower value symbols are the cards 9 through to Ace, whilst the premium symbols are the gems, red, green, purple and blue. The purple is the highest value at 25x for five on a payline. There is also a Wild – shown as a 2x symbol with rainbow colors behind it. This will only appear on reels 2 to 5, but when it does and forms part of a line it doubles your win. Two or more multiplier wilds also combine to create bigger wins.

The other key symbols are the Mystery Boxes, and the scatters, required to trigger the free spins round.

Key to the base game is the Mystery Box. It acts like a Mystery Symbol. When it lands all instances of it transform into identical symbols of any value, including scatters and wilds.

In keeping with the theme of the show there is also a Double Up Gamble feature that comes into play after EVERY winning spin. Here you can choose to take your win value or gamble to double it.

You need to land three or more scatters (the game logo) in order to reach the free spins round where you will be granted 7 spins. During the round, landing further scatters will get you further spins and multipliers, represented by the ladder on the left of the reel set. Each move up the ladder earns you at least one extra spin and more multiplier juice.

There are 11 steps on the ladder, with a top rung on which your multiplier becomes 50x. If you reach this far you will also have earned an extra 17 spins. In that thin air the top win potential of 12,000x might just be in reach.

If WWTBAM Megaways™ was a bit too risky for you, then Mystery Box is a good alternative. The variance is lower but the payout potential is still pretty high. This is a nicely built slot that is simple but fun, making good use of the gamble mechanic and progressive multipliers to crank up the tension in the same way the TV gameshow does. Worth a spin this autumn.