A greatest hits outing from Big Time Gaming featuring the infamous Megaways™ expanding reels, Triple Reaction™ and Heartstopper™ Free Spins in a super-high variance slot based on the UK’s own coin factory. A mind-boggling 40,000x top payout and 96.48% RTP. 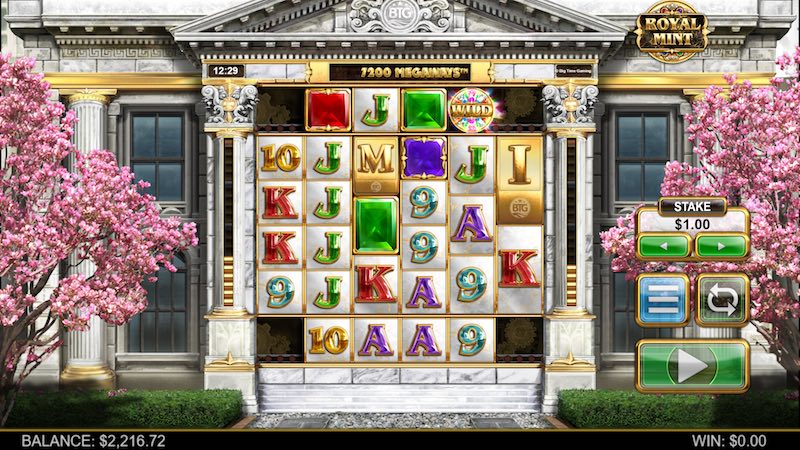 WHERE CAN I PLAY Royal Mint Megaways™?

Obsessing over spelling M-I-N-T!
So hard to unlock that free spins round!

Big Time Gaming is a slot developer who needs no introduction. Their Megaways™ game engine has revolutionized the slots industry, inspired many copycat versions and led to a renaissance in new high variance slots. There was a time when the anticipation around every new release from this Australian game developer was simply huge, with exclusives regularly handed to partners like Leo Vegas, and first spins given to high-profile slots streamers like Letsgiveitaspin.  Whilst the noise around Megaways™ may have died down a bit since the early days, partly because there are so many of these slots on the market now, it’s still a pleasure to load up a new one and experience the thrill of taking it for a spin for the first time.

And so it is with the January 2020 release, Royal Mint Megaways™, a slot that uses the UK coin-making factory as it’s backdrop and adds both Opal Fruit’s Triple Reaction™ and Lil Devil’s Heartstopper Free Spins into the mix to further spice up an already very high risk slots experience.

The Johnson Smirke Building in London, the home of the Royal Mint from the early 19th Century until 1967, provides the backdrop on which our six-reel game sits. It’s an impressive design, with blossoming trees standing either side, and is suitably grand for an ambitious game. As with most Megaways™ slots a reel can display anything from two to seven symbols each, giving a maximum of 117,649 paylines when each is fully expanded – you need to land identical symbols ANYWHERE on adjacent reels from left to right to create a payline. Look out as well for the two 1×4 reels, one above, and one below the main reel set which are part of the Triple Reaction™ feature – the reels two 1x4s spin horizontally rather than vertically, so don’t play for too long or you WILL go cross-eyed!

The low value symbols are the cards 9 through to Ace, whilst the premiums are made up of red, green, blue and purple gems – a familiar site for fans of classic BTG slots like Bonanza. The purple is the highest paying giving 50x for six on a line.

Look out as well for wild that pops up on the top and bottom 1x4s, and the all-important scatters that come as M, I, N and T. You’ll need to spell that out to trigger the free spins round which is where the big prizes can be unlocked.

First up, Cascading Wins, or Reactions as they are known here. As usual, after each winning spin the winning symbols are removed from your payline and replaced with new ones. If more wins are created then the process repeats, and so on until no more wins occur.

You’ll need to hit the four scatters spelling the word MINT to set up your first 12 spins. This is a high variance slot so it’s not easy. But here’s where things get interesting – as with Bonanza and other classics, a progressive multiplier features in the free spins round. With each win cascade the progressive multiplier increases by 1x, with no limit to how high they can go.

Anyone who has played BTG’s awesome Lil Devil slot with be familiar with this feature: an enhanced free spins round where multipliers double up. To unleash this beast you’ll need to collect gold bars in the base game. These appear every time you land 3 scatters on a spin (i.e. close, but no cigar for the free spins round). You need FOURTY of these – yes FOURTY, no one said it was easy – to set up Heartstopper™. Once you have your fourty bars, the next time you trigger free spins you’ll be in the enhanced mode where your mulitplier starts at 2x and goes up by 2x with each cascade / reaction win.

So you know the basics. Now here’s five key points to remember when you load up Royal Mint for the first time.

Royal Mint Megaways™ is the quintessential Big Time Gaming slot. It brings together their best features from the last three years and it looks great too. But of course, it’s tough as nails.  More often than not you’ll come out of a session feeling like you’ve been seriously roughed up. Of course, one in a hundred, or maybe a thousand times, you’ll come out smiling, with full pockets and on the back of a dazzling win sequence where free spins and multipliers have combined over and over to give you a once in a lifetime epic win. That is the nature of this game and for that reason, high risk slots fans will love Royal Mint Megaways™, but many will simply find it too volatile. Handle with care!