A brilliant BTG slot that ingeniously interweaves the magic of the iconic Monopoly board game brand with the frenetic energy of Megaways™ to create something really special. Packed with features and an alluring 15,000x top payout. 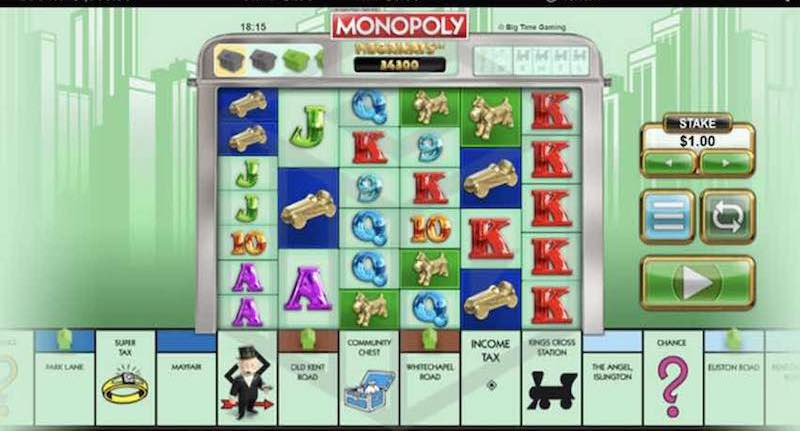 WHERE CAN I PLAY Monopoly Megaways™?

The Monopoly brand has been used for online gambling games on a few occasions, most famously in IGTs Monopoly slots series. However, those games will fade into history once you’ve played the new Megaways™ version, such is the quality of this slot.

The genius of BTG’s games has always been in the mix of clever gameplay with super-hot design. Well, here the design is already provided by a hugely iconic entertainment brand whilst BTG have once again worked their magic to interweave the board gameplay into the mechanics of the slot to produce another unique Megaways™ offering.

All the usual stuff is here – cascading wins, free spins, multipliers. And on top we get a re-working of the Holy Diver Megaways™ Reel Adventure feature. In this instance, the adventure is acted out by Mr Monopoly working his way around the board, earning you enhancements as he goes.

It’s red hot, and one of the strongest Megaways™ games to date.

The game looks great, using the reds and classic shades of money-greens from the Monopoly brand. The six reels stand up to 7 rows high in the middle, with the monopoly board beneath them.

The low value symbols are the cards, 9 through to Ace, whilst the high value symbols are taken from the game – the dog, the car, the battleship, the top hat and the letter M, which itself is the highest value piece at 50x for six on a payline.

NOTE: Rather than using Scatters, Monopoly Megaways™ requires you to collect houses on individual streets on the board to unlock the free spins. You’ll need 5 to unlock the bonus round.

Like many Megaways™ slots, Monopoly uses the cascading wins mechanic – after each win, winning symbols are removed and replaced with new ones. If another win line is created, the same sequence repeats. This continues until no more win lines are created. It means you can score many more wins from just one spin.

During the game, Mr Monopoly will make his way around the board, earning enhancements for you as he goes.

The Free Spins round here is unlocked by collecting FIVE houses on a street. If you have more than five you’ll earn one extra spin for each extra house. Any train station or utility you own will also get you an extra spin. Your multiplier value starts at 1x, but with each additional utility or train station it increases by 1x.

During free spins all the same enhancements can be added as the Reel Adventure feature is still active.

Reading this review you can be forgiven for feeling that the gameplay sounds a little complex. But in truth it isn’t. This slot is all about building up properties to get you into the free spins round where you can unlock the bigger prizes. The more utilities and train stations you can add along the way, the better your chances of winning big as you increase your multiplier values in the bonus round. Undeneath it all, the mechanics are not dissimilar to many other Megaways™ games, but the ingenious execution, mixing the classic slot features with the Monopoly board set up, makes this game stand out a long way from the rest.