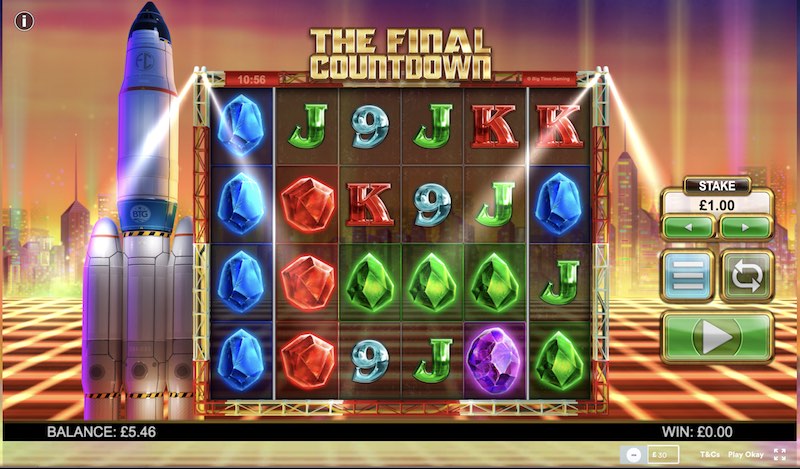 WHERE CAN I PLAY The Final Countdown?

The Final Countdown is the second in a trio of epic 4,096 ways to win slots from Australian Game developer, Big Time Gaming. The first was Danger! High Voltage, a game whose mixture of cloning reels stocked with enhanced wilds sent high risk slots fans crazy with excitement. BTG know a good formula when they see one, so after some delay, the much anticipated follow up, The Final Countdown, arrived in our casinos in March 2019.

This game showcases all that is great about BTG slots – brilliant, bright and exciting designs, fast and furious gameplay, and big win sequences that are mind blowing when they hit, stacking up wilds upon wilds and multipliers upon multipliers, all playing out in a free spins round with unlimited re-triggers.

And of course, there is that epic soundtrack too!

The classic 4,096 ways to win reel format is 6×4 and that’s exactly what you get here, paying out from left to right and right to left for identical symbols on adjacent reels. The theme of the game is futuristic neon space travel with a bit of rock and roll thrown in. There are rockets, cityscapes and an enormous lighting rig to take in before you set the reels spinning.

The usual card symbols 9 to Ace represent the low payout symbols, whilst the high value ones are shown by purple, red, silver and green gems. Purple pay out 25x for six on a payline.  The wilds and multiplier wilds are represented by male and female astronauts, whilst the scatter is the game logo.

In the base game the up to four reels can clone on one spin (reels two to five). When this happens each cloning reel will be identical to the other, increasing the chances of landing wins.

The Free Spins round gives two options when three or more scatters land. They are as follows:

The Countdown Free Spins – 8 free spins with roaming multiplier wilds. They move to different positions on the reels after each spin. There is also the chance to retrigger the free spins by landing more scatters. Each time another scatter lands, your countdown meter will decrease by three (after starting at ten). When it hits zero, the free spins re-trigger, but this time with a further enhanced multiplier wild.

Re-trigger three times and the free spins round plays out with a 256x roaming multiplier wild!

Heading For Venus Free Spins – 15 spins with a guaranteed cloning reel on each spin. Also comes with Velocity Wilds that carry multipliers of up to 888x!

This is another massive hit from Big Time Gaming, building on the success of Danger! High Voltage without the falling into the complacency trap of turning out a generic remake. The Velocity Wilds that come with the Heading For Venue Free Spins round are epic in every way, and the chance of an 888x multiplier is enough to get any slots player’s heart thumping. Unmissable!